Join us for ALL DIGITAL Week 2019 and reinvent yourself!

For the second time, in 2019 the Centre of Technical Culture Rijeka (CTC Rijeka) led ALL DIGITAL Week in Croatia as a National Partner, bringing all the experience of participating and organising it on the regional level since the very beginning in 2010.

A total of 76 workshops were held in Croatia within the All Digital Week for over 1,500 people. Many of those workshops covered a wide range of topics: robotics, programming, digital services such as Facebook and Google, Internet security, visual identity, etc. 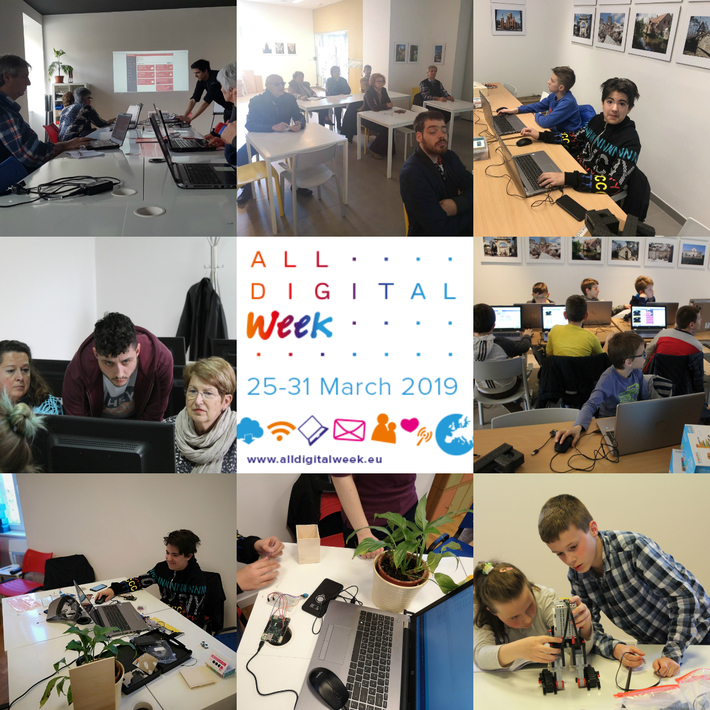 Centre of Technical Culture Rijeka itself organized 18 workshops within its premises for people of all ages and gathered 10 partners who organized workshops throughout Croatia.

The IRIM (The Institute for Youth Development and Innovation) has supported All Digital Week with over 30 workshops for librarians who will continue to transfer knowledge to young people who come to libraries. IRIM has equipped all of these libraries with micro:bits – a little programmable microcomputers, equipped with a multitude of sensors, and can be used in various school subjects – from self-explanatory math, physics and computer science to music and physical education classes. 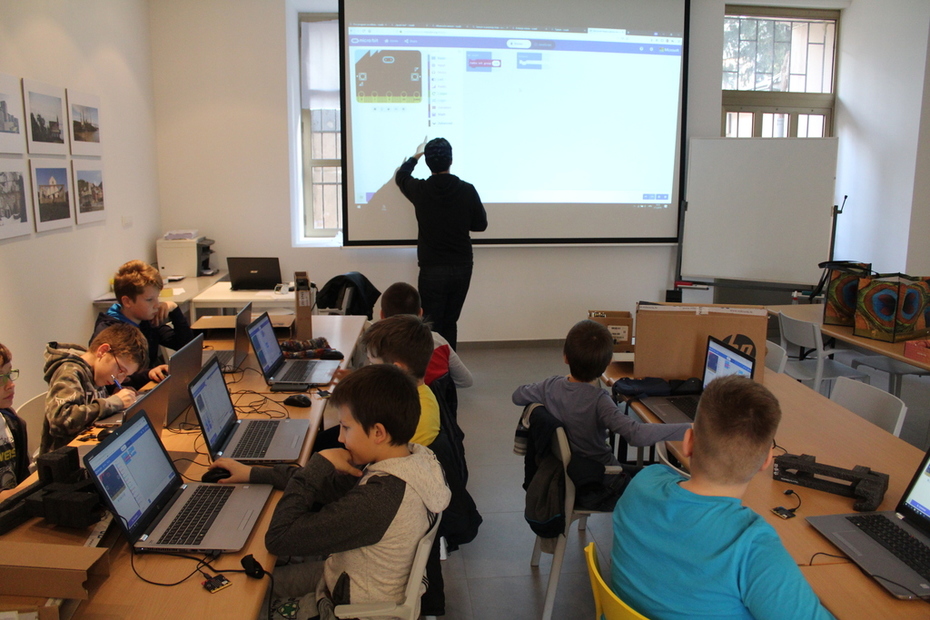 Partner Marlena Bogdanović has taught elementary school basics of computer thinking, and Dalia Kager worked with the micro:bit to make a STEMazing World.

Connect IT has organised workshops for Mbot, LOGO, Phynton and Scratch programming and development of video games for kids. For those with a more creative mind, there was a workshop for digital painting and visual design.

The Koprivnički poduzetnik held an intensive education on creating a website for unemployed persons aged between 20 and 29 years. They also hosted a IoT workshop where students learned about microcontrollers. 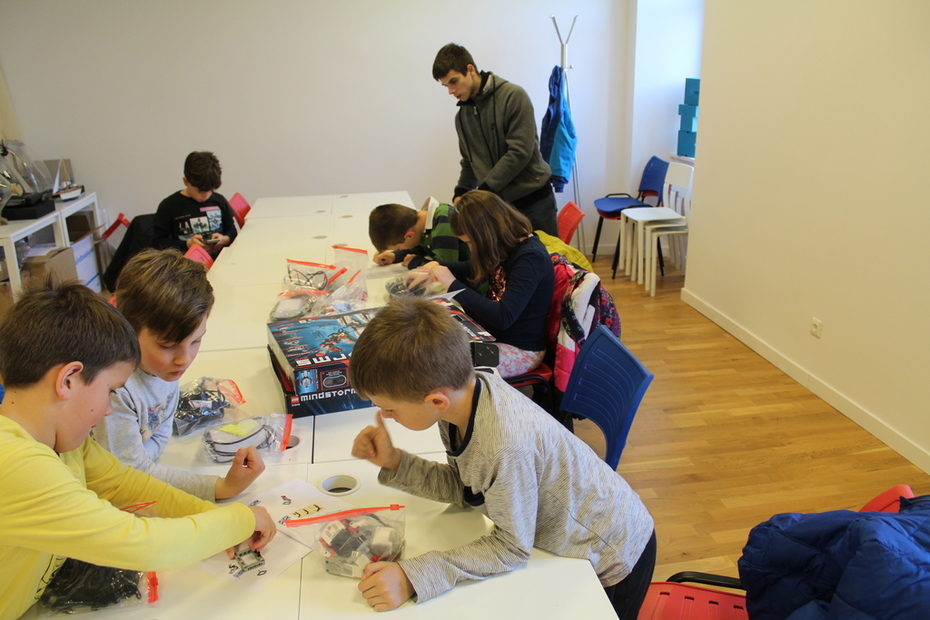 The Rijeka City Library – American Corner has held a 3D printing workshop and demonstrated some of the basic 3D technology capabilities.

Center of Technical Culture Rijeka wants to thank all their partners for training over 1,500 people and reaching over 15,000.

Join us for ALL DIGITAL Week 2019 and reinvent yourself!

For the second time, in 2019 the Centre of Technical Culture Rijeka (CTC Rijeka) will lead ALL DIGITAL Week in Croatia as a National Partner, bringing all the experience of participating and organising it on the regional level since the very beginning in 2010.

During the ALL DIGITAL Week 2019 CTC Rijeka will organise free workshops and lectures that will involve citizens of all age groups and different backgrounds, from children and young people to elderly citizens, as well as socially excluded groups. By promoting activities of ALL DIGITAL Week, CTC Rijeka will inform them about the possibilities enabled by new technologies and the ways how to use it safely and responsibly, in order to enhance their digital skills, increase media literacy and employment possibilities. For more advanced children, youth and other citizens they will organize activities in the STEM field (coding, robotics, etc.)

CTC Rijeka will develop activities, which could be carried out by their event organizing partners. Activities will be organized in three blocks:
1. Building personal responsibility and promoting media and digital literacy. This series of workshops will deal with social networks and online news media and will promote the values of tolerance and active citizenship. Citizens will learn how to protect their private information, how to recognize and avoid hate speech, how to aptly present themselves on the social networks.
2. Using digital tools to improve their chances in the increasingly digital economy and society. Citizens will learn how to use free online tools, such as e-Citizen, e-mail, Google tools, Europass, etc.
3. Learning new digital skills in order to enhance employability. Citizens will be able to involve in the workshops that provide introductory and advanced lessons on programming, robotics, graphic design, all using digital tools.

CTC Rijeka will include 15 elementary and secondary schools that will organise activities in the fields of STEM and advanced technology usage, and also regarding safe and responsible usage of online tools, social networks and all sources available on the Internet.

In addition, approximately 10 NGOs will be involved in promoting and celebrating ALL DIGITAL Week, by organizing promotional and educational activities, events, workshops, and lectures, with the aim of enhancing digital skills and promoting digital literacy among general public.

Other stakeholders that will be indirectly included are decision makers, employers, other institutions and organizations, as well as general public at national level, that will be informed on the activities organized during the campaign, their results, and the importance of digital literacy today.

CTC Rijeka plans to involve 3,000 people in the campaign activities and reach 20,000.

For the first time Centre of Technical Culture Rijeka (CTC Rijeka) led the ALL DIGITAL Week 2018 in Croatia as a National Partner, bringing all the experience of participating and organising it on the regional level since the very beginning in 2010.

CTK Rijeka sent invitations to join the campaign to organisations involved with digital and media literacy and computer science. Out of many potential candidates, they established contacts with two major organisations, whose involvement greatly enhanced the campaign in Croatia: IRIM (The Institute for Youth Development and Innovativity) and CATC (Croatian Association of Technical Culture) from Dubrovnik-Neretva Region. IRIM held over 40 workshops for elementary school teachers and professors. The workshops were based on supporting the ProMikro project, based on micro:bit ecology, while CATC joined with activities based on the Croatia Creates (Hrvatska stvara). 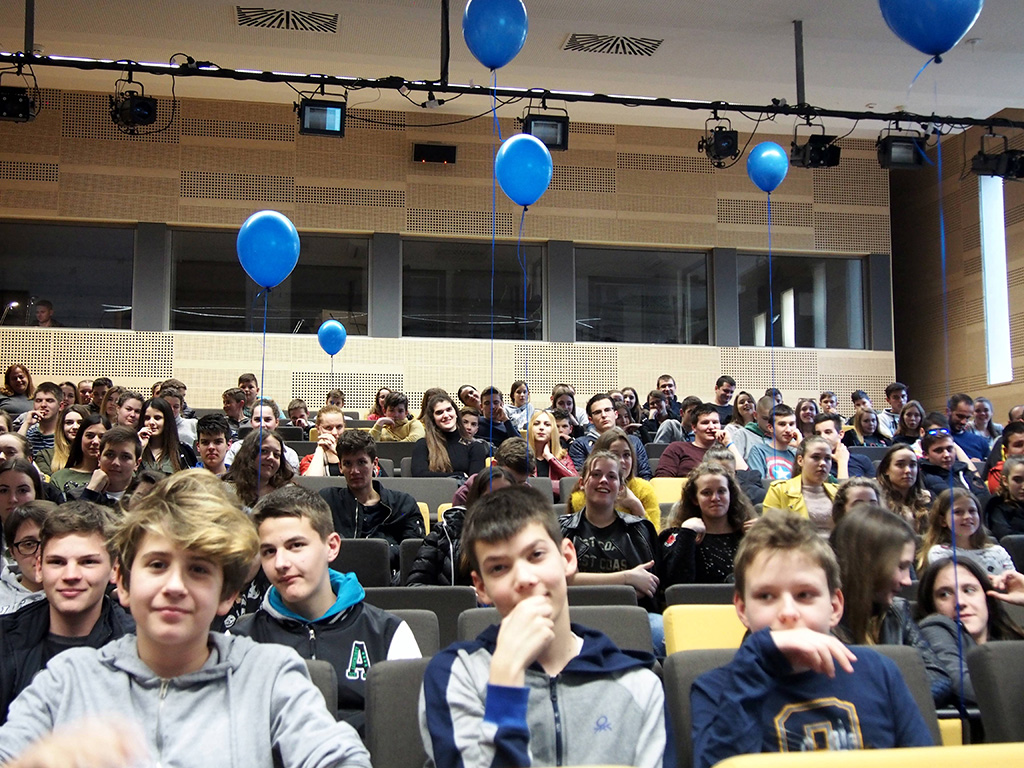 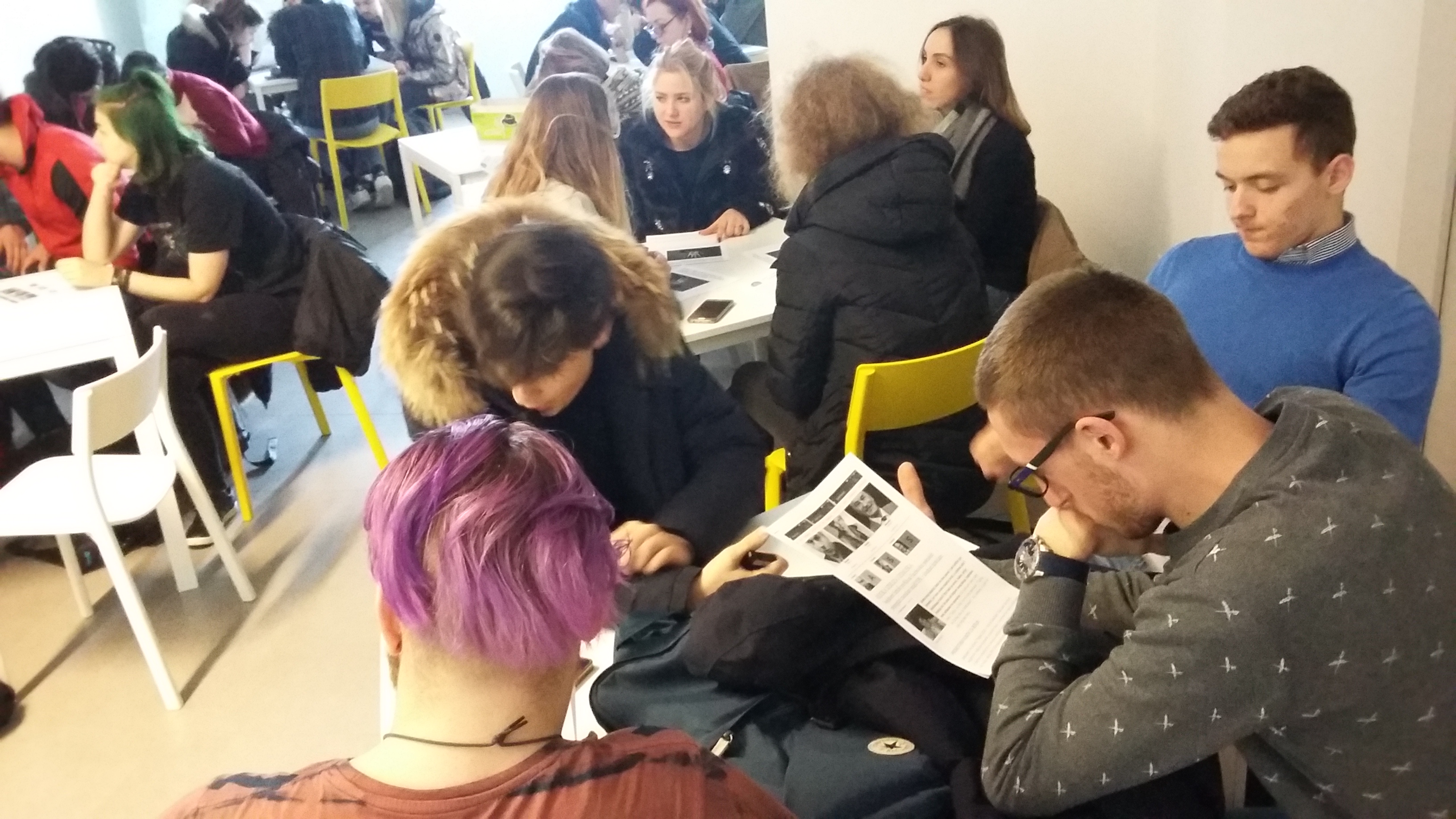 Over all, over 1,500 people from various backgrounds – elementary, high school and university student, unemployed, entrepreneurs and seniors – joined the campaign though over 85 events, organised in all of Croatia’s major cities and towns. The largest part of the demographic were students, whose interest was mainly in acquiring new digital knowledge and skills. The same goes for the unemployed, with the added interest in presentation skills, as well as skills that could help them start a business. The seniors were concerned with the security on the Internet. A big part of participants in the campaign were elementary school teachers, and who estimated that they needed to upgrade their digital skills. 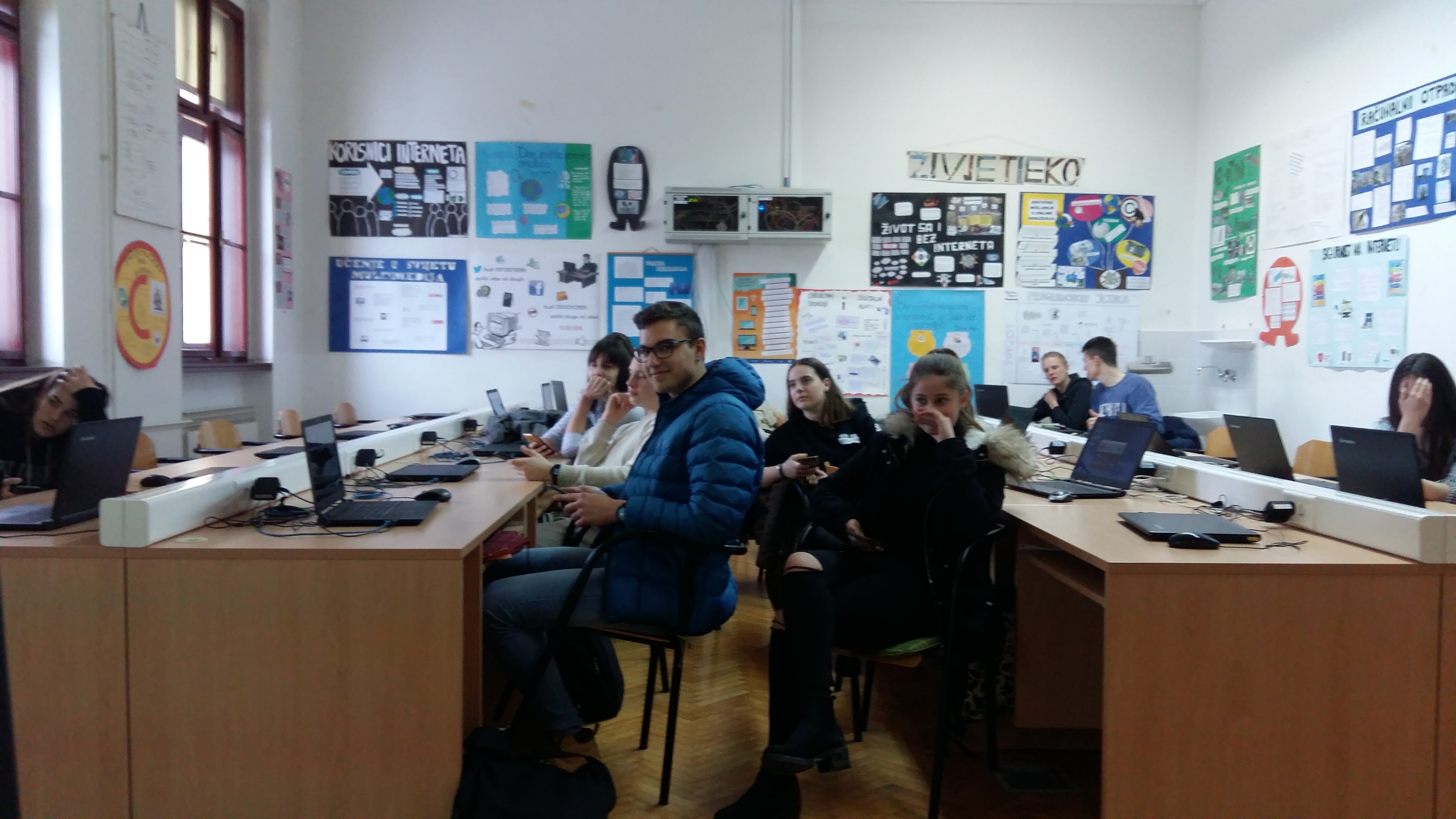 In total, 30 organisations provided 85 events for 1,500 participants in Croatia.

The greatest achievement was that IRIM (The Institute for Youth Development and Innovativity) and CATC (Croatian Association of Technical Culture) chose to join the campaign. They brought great programmes and established concepts, that meshed very well with the overall aims of the ADW campaign. Also, their involvement provided good coverage and dissemination of the campaign results. CTK RIjeka hopes that the cooperation they established this year will carry on to the next editions of the ALL DIGITAL Week campaign! 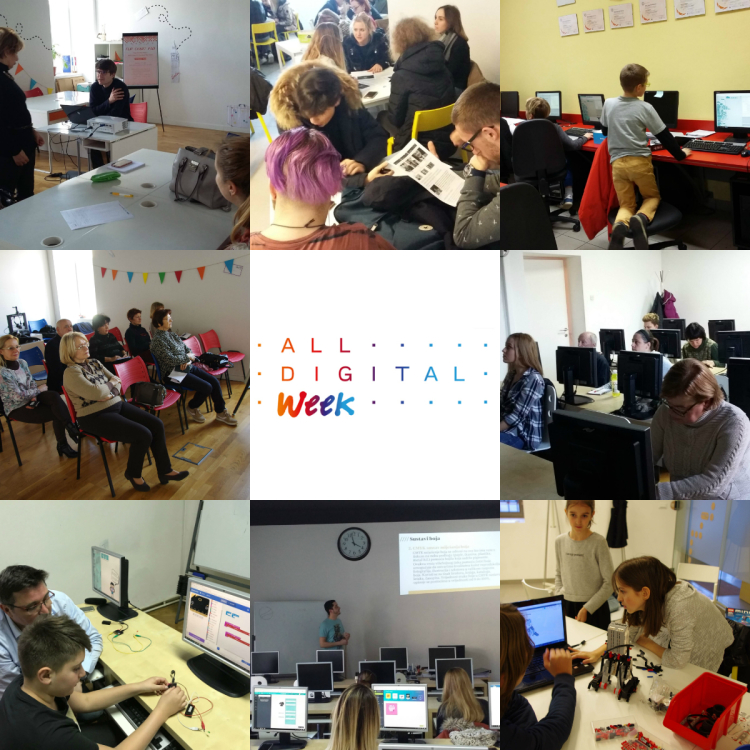 Some media publications in Croatian:

For the first time Centre of Technical Culture Rijeka (CTC Rijeka) will lead the ALL DIGITAL Week 2018 in Croatia as a National Partner, bringing all the experience of participating and organising it on the regional level since the very beginning in 2010.

During the ALL DIGITAL Week 2018, CTC Rijeka will organise free workshops and presentations that aim to involve citizens from all age groups.The goal will be to inform them about all the possibilities enabled by the new digital technologies. Also,
activities will emphasize the responsible approach to using new technologies.

CTC Rijeka contacted the best Croatian organisations involved in improving digital and media literacy, especially concerning children and young people. Our partners and event organisers recognised the potential of ALL DIGITAL Week and joined the campaign. A lot of the events are organised by IRIM (The Institute for Youth Development and Innovativity), which created a thriving teaching and learning system based upon micro:bit microcomputer, and are aimed at improving overall digital literacy in Croatia. The education will be implemented at schools and NGOs.

As a national partner, CTC Rijeka will develop activities that can be implemented by their event organizing partners. Activities are organised in three blocs:

CTC expects to engage 2,000 participants in activities and reach over 20,000 via their Facebook page, official website, newsletter, press releases and promo activities.

2017:  Raising public awareness about the key role of digital technologies in a modern society

In 2017, GOW17 in Croatia will be implemented by two Telecentre Europe member organisations – Telecentar and CTC Rijeka. Telecentar will organise the national public awareness campaign and CTC Rijeka will focus on face-to-face training.

Already a partner since 2012, Telecentar again will coordinate the Get Online Week activities in Croatia.

The main focus of the GOW17 in Croatia will be a public awareness campaign  about the key role of digital technologies in a modern society. Telecentar with its major media partners, such as Croatian Radio Television, Radio Student, Television Student and student newspaper Global, will produce and  broadcast targeted media messages. It is a very efficient way to reach out to vast audiences, as proved by previous years, and in 2017 the plan is to reach at least 100,000 people.

For the campaign, Telecentar will organize:

On the topic of Employment and Entrepreneurship, Telecentar will produce a MOOC on digital entrepreneurship. This MOOC is part of the European Youth News Exchange (Y-NEX) MOOC on mobile journalism. In addition to English version, Telecentar plans to produce a Croatian version and demonstrate MOOC production to the local stakeholders.

GOW17 will also be used to officially launch the web site digitalna.hr,  which will  serve as an information and online education hub for digital technology related projects in Croatia.

Another partner for the GOW17 in Croatia is Centre of Technical Culture Rijeka (CTC Rijeka), NGO that has celebrated Get Online Week from its beginning in 2010.

In Rijeka, Croatia, the focus will be put on face-to-face training, and citizens of all ages will have the opportunity to develop their digital skills with the 10 workshops, prepared by CTC Rijeka. The youngest, children from 2nd to 4th grade of primary school can join workshops on the usage of mBots or the program Scratch. Older students, those from 5th to 8th grade, can join a workshop on MicroBit. Youngsters can join workshops on topics such as visual identity and Photoshop, and the unemployed – workshop on Europass. For elderly citizens, a workshop on the usage of Facebook will be organised. Workshops on eServices, Online security and Skype are open for all citizens. All the workshops are free of charge. More info on: www.ctk-rijeka.hr

CTC expects approximately 150 participants for their workshops; and they will reach about 1500 people via their Facebook page, official website, newsletter, and press releases.

GOW16 in Croatia was coordinated by Telecentar. The activities planned with partner organizations included a series of round tables, workshops, and media publications. The GOW16 was used to lauch a national survey on computer programming and coding as a key competence, in preparation for the implementation of the new school curriculum in Croatia.